Home / Business / Economics / What is Foodflation?

Posted on January 30, 2011 by Hajara Saleeth in Economics

Foodflation has become a buzz in the world economy and said to have major impact on developing nations. What is this foodflation? What is happening to world food market? These are some of the common questions hold by people. Beside that during past few weeks in Sri Lankan media gave publicity for the foodflation in a localized context.  In this article I wish to share my view on foodflation of Sri Lanka. 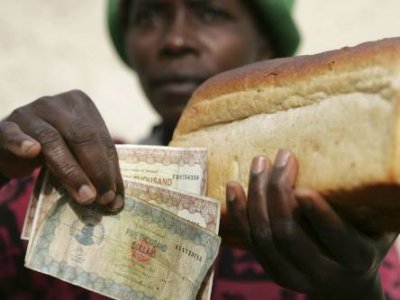 Foodflation (also know as Food price Bubble) is the continuous rise in the food prices which is higher than the general inflation level. According to Reuters food prices have gone up by 11.7% in the first 11 months of 2010 where as the general price level (inflation) has risen only by  1.9%. This indicates a serious mismatch and requires precautionary measures to avoid food crisis creating starving nations. Majority of people from developing nations spend more than 80% of their income on food and what will happen if the food prices rise at 15%-20% rate? Should n’t this issue be given more priority in the agendas of world economist?

World leaders fear of food crisis. They expect for a world without food, starvation, hunger and may be a third world war to not divide/acquire countries but to for survival and reduce the hunger of the nations. Certain countries have already started missions to get rid of food crisis. Indonesian President have requested his people to start a vegetable farm in their gardens in a smaller scale which will help them to reduce effects of food crisis.  Indian and Chinese governments have taken precautionary measures but they seem to have failed and the food prices in those countries are rising. Meanwhile Sri Lanka is warned of food crisis at the beginning of the year 2011 and it is the time for us to think about foodflation at a local level.

The warning for food crisis in  Sri Lanka was issued due to the bad weather condition occured during the first few weeks of 2011 which caused massive floods in eastern, northern and north central provinces of Sri Lanka where the massive cultivations were taking place. More than 50% Maha season harvest was destroyed resulting in 21% of the rice cutivation of Sri Lanka being destroyed. And the irrigation system of the country is damaged making it impossible to do upcoming Yala season cultivation which will furthur reduce the rice cultivation in the future. Aprat from that vegitalbe prices have gone up by more than 200% as a result of floods and the live stock of 240,000 were destroyed which will again result in high price of meat, milk and eggs. And Meteorological Department of Sri Lanka predicts for a drought season towards the mid 2011 which will again result in destruction of crops and make people starve again.

The Queensland flood has affected the diary food prices in Sri Lanka but the government has reduced the import duty on diary foods to keep the price stable but it seems to be temporary measure. The prices of chicken and eggs are rising due to poor poultry production in Sri Lanka and now imported eggs and chickens are made available market which in turn affects the self sufficiency of the economy. Coconut prices and coconut oil are rising due to the destruction of coconut cultivation to produce real estate businesses and Sri Lanka has lost the one of its major export crops. Prices of wheat flour is also rising which was reflected in bread and bakery product prices a month ago and on top of all these the price of crude oil barrel has surpassed USD 100 per barrel which will soon be reflected in food prices.

This is the time to think about Food Price Bubble serious..!