Home / Business / What is Triple Bottom Line of a Business?

What is Triple Bottom Line of a Business?

Posted on January 15, 2011 by Hajara Saleeth in Business, Management

In normal day to day business when it comes to “bottom line” all what we recall is the profit level that is earned by an organization. But with the changes in the business world there is a new concept introduced called “triple bottom line” which includes 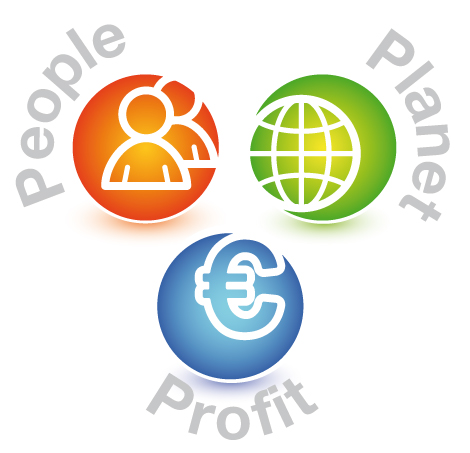 This triple bottom line is also known as TBT (Triple Bottom Line), 3BL, and 3P (for Profit, Planet and people). To achieve sustainability the organization needs to strike a good balance between TBL and failure to do so will result in failure of organization and shutting down. Elements of TBL can be described as follows:

This is the starting point of the concept of bottom line where the managers only focused on a single bottom line. The emphasis was basically on the bottom line of the income statement which indicated the profit level of the company. In other words the company should be economically performing well by generating adequate income to cover up expenses and generate profits for shareholders. In the past when a manager said his main concern is the bottom line of the business his concern was solely on increasing the profits of the organization. This single bottom line concept is an outdated concept in the modern world where there are additions to this concept to fit into changes in the environment.

With time managers realized that the single bottom line concept is not adequate to survive in the market as all the players in the market were able break even and mark profits. Therefore they decided to differentiate themselves with the concept called “double bottom line” which included a “people” component in addition to profits of the business venture. The “people” includes the employees of the organization and the community in which the organization operates. The organization should be able to treat their employees well and keep their employees satisfied to retain them and make use of their skills. And also the business should satisfy its stakeholders such as general public build their goodwill and reputation which will in turn bring them sales and unique identity in the market place. The process of satisfying community can be done in ways such as engaging in charities and providing sponsorships and so on. Most companies engage in CSR activities to make sure they serve the people well.

This is the latest addition to the bottom line concept which says that company should be concerned not only about profits and people but also about the environment in which operates. The environment should be protected in order to achieve sustainability as without an environment to operate there will not be businesses existing. The concept such as green production, recycling, reusing and green marketing are emerged support the component of planets in the triple bottom line concept.

One thought on “What is Triple Bottom Line of a Business?”