Home / Business / Theories of Inflation and its Economic Consequences

Theories of Inflation and its Economic Consequences

Since it’s specifically difficult to identify the reasons for or factors that contribute to inflation, many theories and concepts have been introduced for this purpose. Each theory tries to clarify the supply and demand factors that result in the creation of an inflationary situation.

The main theories of inflation are as follows,

Where: M is the stock of money in circulation

V is the velocity of circulation

P is the general price level

Y is the total income.

The Keynesian view on inflation initially introduced in a book titled The General Theory of Employment, Interest and Money published in 1940.

Such an inflationary situation is created due to the fact that at optimum or full employment of output (maximum utilization of scarce resources) a given economy is unable to increase its output or aggregate supply in response to an increase in aggregate demand. 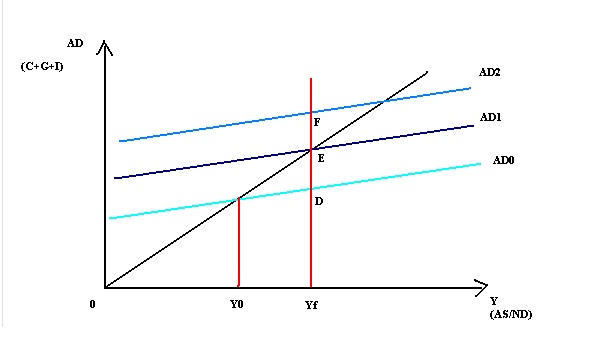 According to the graph, when the government uses monetary and fiscal policies to improve full employment of production levels, there will be an increase in aggregate demand level of the economy from AD0 toAD1 which would result in the creation of full employment level of equilibrium out put represented at the point E. If the aggregate demand level increases further from AD1 to AD2 the general price levels shall increase since the full employment of production level will remain unchanged at Yf. The output level will not change since all resources are fully employed at the point of Yf.

The monetarists theory states that when the money supply is increased in order to grow or increase production and employment, creating an inflationary situation within an economy.

A monetarist believes increases in the money supply will only influence or increase production and employment levels in the short run and not in the long run. Accordingly, there will be a positive relationship between inflation levels and money supply. The monetarists explain this relationship using the theory of natural rate of unemployment.

An increase in the general price of goods and services will increase the cost of living and lead to a decrease in the living standards of fixed income earners. Such a situation can create many social, economical, and political problems within a given country.

In situations of inflation the aggregate demand for goods and services will decrease due t the decrease in purchasing power of consumers. Accordingly, output levels will be affected by a decrease, resulting in an overall reduction of full employment or resource utilization within the economy. On the other, hand the production of essential goods can be limited or ignored ignored since many producers will try to purchase high priced goods with a greater increase in price levels of inflationary effect and profit.

Savings will be discouraged since the real value of savings declines and the returns that could be received through other means of investment increases. This is because the inflation is high than the rate of interest received on the deposits or savings.

Fixed income earners or parties who receive wages, rent and interest income on previously agreed, fixed term contracts are the parties that are the most adversely affected by inflation. They are unable to increase their income and the real value of money continually decreases leading to a decrease in real income of these parties.

There will be low levels of domestic and foreign investments due to the economic and political instability created by high levels of persistent inflation within the economy. On the other hand, speculators and investors tend to invest more on real assets than financial assets, which will lead to low levels of fund formation for business activities and long-term investments

The governments current and capital expenditure will increase in time inflation, since the government income remains unchanged or decreases, the budget deficit expands further. the government needs to provide assistance in terms of fund transfers to low and fixed income earners and if the government finances such expenditure using borrowings from banking sources, further inflationary pressure will be created.

11 thoughts on “Theories of Inflation and its Economic Consequences”