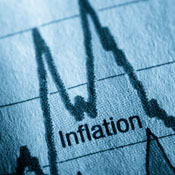 A continues decrease in the general price levels over a period of time will be identified as a situation of deflation. Inflation and deflation will inevitably affect the economic stability or in other words leads to Economic instability, as it would hider the performance of an economy.

Inflation is measured using a combination of different price indices. The rate or percentage of the increase in general price levels of a current year in comparison to the previous year’s values. This is identified as the inflation rate.

In simple terms this is the creation of a general price which is actually lower that the actual market price that should exist within a country through the interactions of market forces (supply and demand), due to government regulations.

A low level of inflation that exists with the economy over a period of time is identified as creeping inflation. In a given economy if the annual inflation growth rate of general price levels are less than 5% it is considered that such an economy is faced with Creeping Inflation. Creeping Inflation however does not create any adverse effect to an economy therefore need not be strictly regulated.

A rapid or very fast increase in a country’s general price levels over a period of time is known as either Galloping Inflation or Runaway inflation. Certain economists also identify it as Strationflation. In such situations a given economy can experience inflation rates that range from about 10% to several hundred percent. This causes severe consequences for an economy and makes government intervention essential.


Warning: Trying to access array offset on value of type bool in /home/tutebox/www.tutebox.com/wp-content/themes/volt/functions.php on line 487